Home Actualités cigarette électronique , The Mighty Manfred Mann: From ‘Do Wah Diddy Diddy’ to ‘Blinded By the Light’ 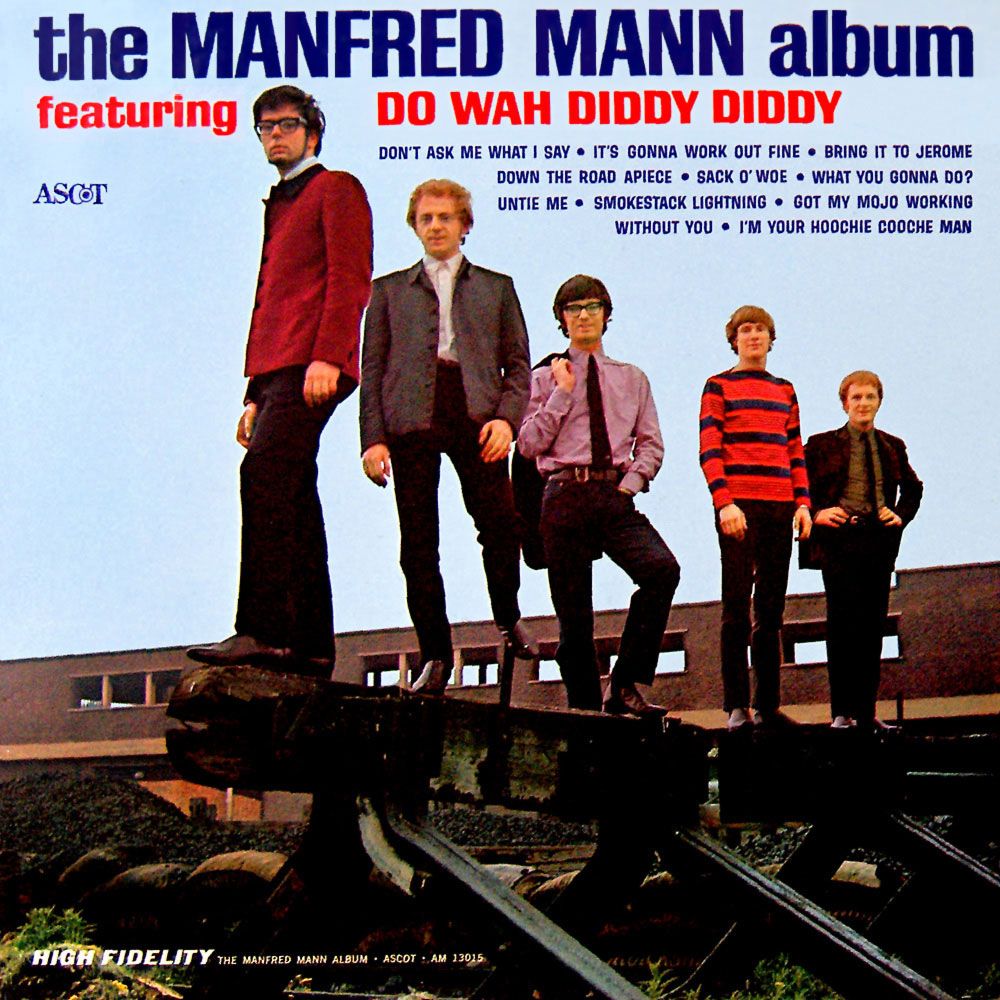 If you were utterly unfamiliar with ’60s and ’70s rock, and someone were to play for you, in succession, the top 10 hits “Do Wah Diddy Diddy,” “The Mighty Quinn (Quinn the Eskimo)” and “Blinded By the Light,” you might find it difficult to believe they were all recorded by the same band.

And, in a sense, you’d be correct in your assumption: Although each of those cover songs was credited to some variation on the name Manfred Mann, they featured a shifting cast of participants, among them three different lead singers—none of whom were the keyboardist whose name went on the records.


Perhaps it’s best to start at the beginning. Manfred Mann—the person—didn’t start out as Manfred Mann, but music fans probably wouldn’t have paid much mind to a band called Manfred Sepse Lubowitz, the appellation he was given when he was born in Johannesburg, South Africa, on October 21, 1940. During the years 1959-61, the jazz-trained Lubowitz and a friend recorded a pair of albums as the Vikings, by most accounts South Africa’s first rock ’n’ roll band, although success eluded them outside of their home country.

Disgusted by South Africa’s racist apartheid policy, Lubowitz moved to the U.K. in 1961 and began contributing articles to a jazz magazine, using the pseudonym Manfred Manne (he soon dropped that final e). The following year Mann met Mike Hugg and they formed a band called the Mann-Hugg Blues Brothers, which evolved into the quintet simply called—at the suggestion of EMI Records producer John Burgess—Manfred Mann.

Their timing couldn’t have been better. With Mann on keyboards, Hugg playing drums, Paul Jones handling the lead vocals, Dave Richmond on bass (soon replaced by Tom McGuinness) and Mike Vickers on guitar, saxophone and flute, the London-based band signed with EMI in 1963 and began releasing singles in their home country. The first two, an instrumental titled “Why Should We Not?” and the followup “Cock-a-Hoop,” failed to chart, but success came their way in early 1964 with “5-4-3-2-1,” a rocking number, written by Mann, Hugg and Jones, that served as the theme song for the British pop music program Ready Steady Go!


That single made the top 5 in Britain but it wasn’t until the summer of 1964 that the entity known as Manfred Mann took off in earnest. “Do Wah Diddy Diddy,” written by Jeff Barry and Ellie Greenwich—the songwriting couple who’d been cranking out hits for producer Phil Spector and others—had been recorded previously by the Exciters, an American quartet whose 1962-’63 “Tell Him” had perched in the top 5 on the Billboard chart. Their take on “Do Wah Diddy” (yes, it was lacking a Diddy) hadn’t exactly torn up the airwaves, stalling at #78 in early 1964. With Jones taking the lead vocal, Manfred Mann turned the song into an electrified, soulful powerhouse and, riding the wave of the British Invasion, they rode it all the way to #1 in the U.K. in August and, on an indie label called Ascot, to the top of the charts in America a couple of months later.


Manfred Mann was an instant smash in the States, and while American fans had some catching up to do, most quickly came to understand that Manfred Mann wasn’t the good-looking frontman with the booming voice but the beatnik-looking fellow with the beard and glasses playing the organ.

Continuing in the same vein, the Manfreds—as the lyrics of “5-4-3-2-1” called them—returned in the late fall with “Sha La La,”  another beat-crazy cover tune, this one penned by Robert Mosley and Robert Taylor and recorded originally by the Shirelles, of “Will You Love Me Tomorrow” fame. The girl group’s version had peaked at #69 in early 1964, but Manfred Mann, with Jones again offering a steamy vocal lead, pushed the tune to #12.


There would be other Manfred Mann singles and albums throughout 1965, including an early interpretation of Burt Bacharach and Hal David’s “My Little Red Book,” used in the film What’s New Pussycat?, and a cover of Bob Dylan’s “If You Gotta Go, Go Now,” but for the most part the band spent the year in a holding pattern. 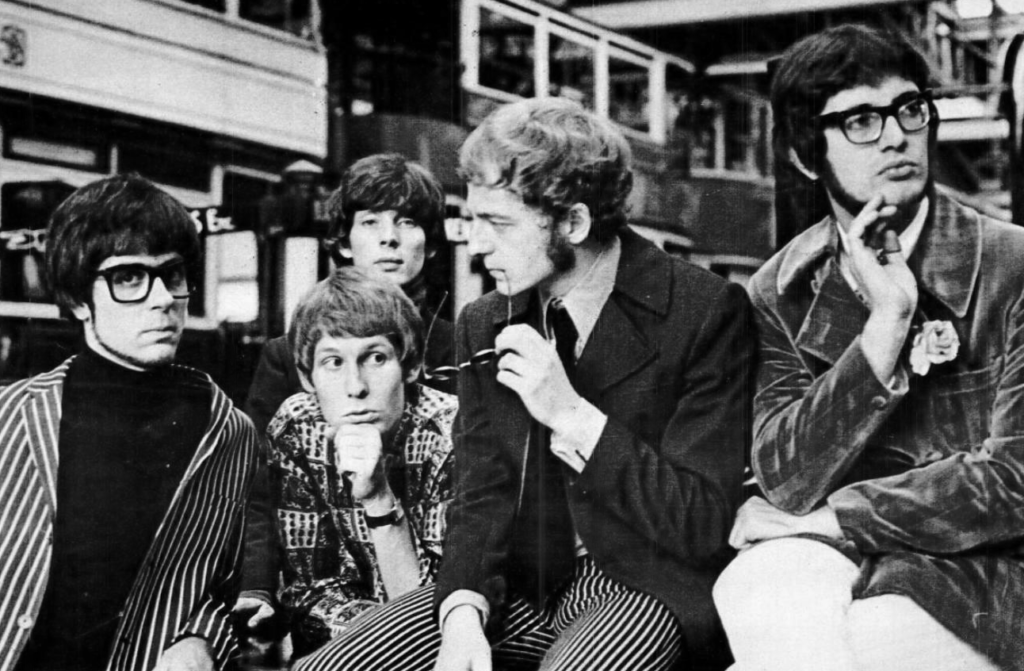 By early 1966, change was already in the wind. Their first single of the year, “Pretty Flamingo,” a lustrous ballad written by Mark Barkan, was the last Manfred Mann hit to feature Jones on lead vocal. But just as notable was the fact that the bassist for the band during this period was one Jack Bruce, late of John Mayall’s Bluesbreakers and soon to make rock history in a big way as one-third of Cream. “Pretty Flamingo” vaulted to #1 in the U.K. while it only reached #29 in America, but Manfred Mann still had way more history ahead than behind them.


Around the same time that that single charted in America, Jones had already departed, shooting for a solo career (at which he was moderately successful). Vickers had also departed the band, while McGuinness had switched over to guitar. In Jones’ place arrived Mike D’Abo, who’d been working with a group called A Band of Angels in the U.K. His first lead vocal on a Manfred Mann single took place on the group’s cover of Dylan’s “Just Like a Woman,” which—with Shel Talmy now producing—made the top 10 in the U.K. but failed to chart at all in America (it did go top 5 in both Sweden and New Zealand, however).

In fact, Manfred Mann ceased to be a chart presence in the U.S. for all of 1967, and American fans surely could have been forgiven for assuming they were no longer even together. The band’s version on “Ha! Ha! Said the Clown,” which would become a minor hit in the States for the Yardbirds, was a big one for Manfred Mann in the U.K. and several other countries, even reaching #1 in Austria, Germany and the Netherlands. But it wasn’t until the beginning of 1968 that the name Manfred Mann again found its way to American radio and the sales charts—in a big way.

“Mighty Quinn (Quinn the Eskimo)” was written as “Quinn the Eskimo (The Mighty Quinn)” by Bob Dylan—a favorite source of song material for the Manfreds—and had been recorded by him, but not released, in 1967, as part of the soon-to-be-legendary “Basement Tapes.” The group got hold of the song and cut it that December, with D’Abo singing the lead vocal, and released it the following month.

In a story told by D’Abo and published in several outlets, the singer recalled, “We met in a publishers’ office. We heard about 10 [Dylan] songs and I thought ‘This Wheel’s on Fire’ would be the one to do, but Manfred liked ‘Quinn the Eskimo.’ It was sung in a rambling monotone but Manfred had recognized its potential. If nothing else, Manfred was a brilliant arranger and very good at extracting the meat from a song.”


Manfred Mann’s cover of “Mighty Quinn” featured yet another new bassist, no stranger to the world of rock: Klaus Voormann had not only designed the cover of the Beatles’ Revolver album but had contributed bass work to recordings by many famous artists. With Hugg and McGuinness still filling out the lineup, the group watched happily as its latest single made it to the top 10 in numerous countries, rising to #1 in both the U.K. and the U.S.

But wait, there’s more—much more—to come! Mann had other ideas he wanted to pursue. The music that would come to be called prog (or progressive rock) was quickly gaining a sizable following, as was fusion, which married jazz to the more virtuosic side of rock. The idea of fancy musicianship and complex arrangements certainly appealed to the more musicianly side of the keyboardist, who’d come to pop reluctantly in the first place. Mann created a brand-new aggregation in 1971, featuring Mick Rogers (guitar and vocals), Colin Pattenden (bass) and Chris Slade (drums and vocals). Mann himself, of course, continued to play keyboards, with a Minimoog synthesizer now added to his array. At first, he reverted to the original band name of Manfred Mann, but by the time the new lineup released its debut album in 1972 (on Polydor Records in the U.S.), it had a new name: Manfred Mann’s Earth Band.

The new moniker was the ideal way to both tie the new group to the old and to maintain distance. Manfred Mann’s Earth Band at first developed a modest fanbase, and for a few years it didn’t seem that they’d ever get the kind of traction the original group had enjoyed. The next four albums—Get Your Rocks Off (1973, titled Messin’ in Britain), Solar Fire (1974), The Good Earth (1974) and Nightingales & Bombers (1975)—failed to generate any major interest in either the U.K. or the U.S. (One U.K. album, 1972’s Glorified Magnified, wasn’t even released in America.)

Still, Manfred Mann’s Earth Band soldiered on until, finally, they found their ticket. Just as the earlier Manfred Mann band had mercilessly mined the catalog of Bob Dylan, in 1975 the Earth Band discovered Bruce Springsteen. The American singer-songwriter was just about to explode at home, with his third album, Born to Run. But his debut, 1973’s Greetings from Asbury Park N.J., had contained two tracks that the Earth Band found suitable for reworking. The first, “Spirit in the Night” (the title of which was slightly jiggered to “Spirits…”), was used to lead off Nightingales & Bombers, and although the album itself stiffed, the single—with Rogers handling the lead vocal—squeaked into the Billboard chart at #97. That was enough, they must have reasoned, to give this Bruce character another try.


Come 1976, for their next album, The Roaring Silence, Manfred Mann’s Earth Band again chose to lead with a Springsteen cover, this time “Blinded By the Light.” Wise choice—the cover, sung by newcomer Chris Hamlet Thompson, flew up the U.S. Billboard chart and landed at #1, the first chart-topper associated with the name Manfred Mann in a dozen years. The album benefited from all of this newfound interest as well, peaking at #10. Manfred Mann’s Earth Band’s version of “Blinded By the Light” is now considered by many to be a classic rock staple.

Related: The backstory of “Blinded By the Light”

The song’s success convinced the band to re-record “Spirit in the Night” with Thompson singing lead. Re-released as a single, this time it rose to #40 on the U.S. chart. And, just to drive the point home, a third early Springsteen cover, “For You,” gave the Earth Band their penultimate chart placement in America, although it never made it higher than #106. 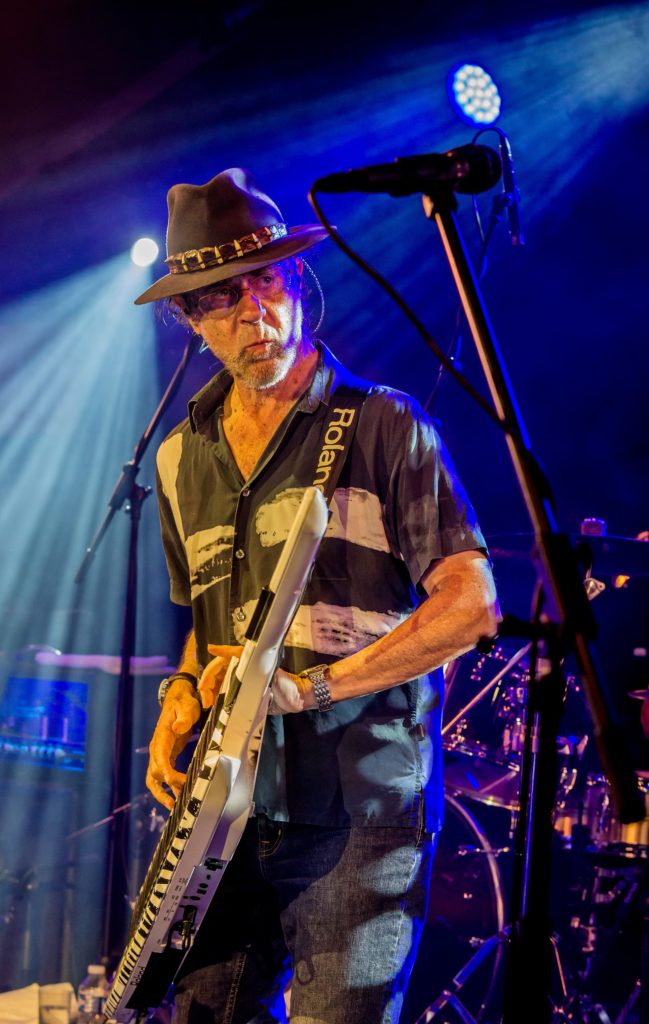 Manfred Mann in 2017 (Photo from Wikipedia)

Manfred Mann, under any name or lineup, would never again enjoy that level of success. There would be a few more chart singles into the early ’80s, giving the namesake a full two decades’ worth of visibility. There would be several other spinoffs and one-off reunions, and a lineup of Manfred Mann’s Earth Band, including the leader and Rogers, still performs as of 2020 (although they haven’t performed in the U.S. in decades).

Classic rock fans may still not know exactly who was singing all those hits, or who played the keyboards for that matter, but they sure know the name Manfred Mann.

Best Classic Bands Editor Jeff Tamarkin has been a prolific music journalist for more than four decades. He is formerly the editor of Goldmine, CMJ and Relix magazines, has written for dozens of other publications and has authored liner notes for more than 80 CDs. Jeff has also served on the Nominating Committee of the Rock and Roll Hall of Fame and as a consultant to the Grammys. His first book was ‘Got a Revolution! The Turbulent Flight of Jefferson Airplane.’ He is also the co-author of ‘Shell Shocked: My Life with the Turtles, Flo and Eddie, and Frank Zappa, etc.,’ with Howard Kaylan.